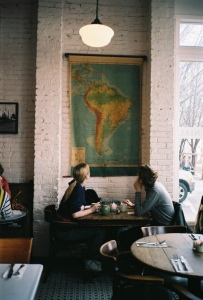 Seeing The World: What Better Way To Spend Your Time?

Throughout my teenage years and early twenties, travelling was always something that I felt I probably should do, rather than actually wanted to. Being the painfully OCD freak that I am and so very attached to London’s home comforts, the grim logistics of backpacking oddly never appealed to me. Needless to say, not showering for days on end, scooping dinner out of a tin (if at all), and nursing foreign hair infestations was not on my list of things to do. Regretfully at the ripe old age of 27, I’ll happily say I couldn’t have been more wrong. It’s the best thing I’ve ever chosen to do.

Obviously there were holidays over the years: family trips to Spain, boozy city breaks with mates, South Africa with Seany, jollies with the missus and music festivals, all of which I’m hugely fortunate to have enjoyed and loved. This trip, however, is something else entirely. The places, people and cultures have been so dramatically diverse, heart-meltingly humble and astoundingly helpful, to the extent I often believed these encounters were an elaborate scam or robbery. They never were.

Views so beautiful they have literally taken my breath away, surroundings that no iPhone, digital camera or even SLR can truly capture and I can’t even attempt to describe in words the sheer size and scale of these places. And the beer, let’s not forget the beer; at any time of day and more wallet-friendly than water on most occasions; smashing three course lunches for about £1.50 in Bolivia and frankly inhaling the dirt-cheap steaks and red wine of Argentina, as if someone were about to steal them from under our noses. The people we’ve met along the way have also been (for the most part, I’ll get to that) terrific human beings and I wouldn’t think twice about putting any of them up in the big smoke.

But despite those seemingly endless praises, travelling does carry its darker undertones. So’s not to put you off, I’ll try and keep this brief. Here’s what those Lonely Planet books don’t tell you:

Travelling with my girlfriend has been hugely rewarding both on a personal level and in terms of our relationship. We’re now so close, it’s become common place to discuss the consistency, colour and volume of our shit, after EVERY trip to the toilet. Sometimes it’s even reported through the bathroom door, bellowing with sheer joy and relief that it’s a, ‘SOLID ONE!’, having beaten the diarrhoea roulette. Your partner’s face is also seriously important, you better really, really, like it, for the only time you don’t see it, is when you’re asleep or during those brief milliseconds of respite when you blink.

I’ve made a point of mentioning how amazing the people we’ve met are, and on the whole, we’ve been very lucky. Of course, as a law of averages, there are going to be exceptions, or, ‘tossers’, as I like to call them. Company so intolerable, that it makes you think perhaps you’re being punished for something in a past life. Wankers so unfathomably annoying, that I frequently found myself pushing an imaginary sock into their mouths, in the hope of putting a plug into the know-it-all, anti-government, anti-commercialism, anti-job, anti-McDonald’s, anti-fucking-anything to be honest chat. One chap in particular spoke at length to us at how large household brands and corporate companies were destroying the world and killing people, as in actually murdering them for land. The same cock sat there telling us all of this in a pair of Nike tracksuit bottoms, guzzling a can of Coke with his Marlborough Lights, showing us ‘proof’, on his sodding iPHONE. We got some comic mileage out of this knob though, so not all bad.

Even after nearly thee months, the concept of this still unnerves me. “Hi eight total strangers, so we’re all just going to sleep in this hotbox of a room together, stacked like free prisoners, pretending like this is all completely normal behaviour?”. It has to be done at times and there’ll be a good few more to come I imagine, but I don’t like it. Not one bit. The sound of incessant snoring, persistent crotch scratching, phlegm-hocking and and bilingual sleep talking will always hold a dear place in my heart. As will the Venezuelan girls puking solidly between 3-4am, then ignoring their 5:30am alarm call for what felt like an eternity, until they were literally shaken to consciousness by my main bitch – she can get scarily Belfast when she needs to. Thankfully we’ve not bore witness (that we know of) to any camel-feeding, sausage-eating, todger-pulling or finger blasting. Yet. We did however come across one harrowing account of a dorm experience, where a charming Aussie girl insisted her new love conquest refrained from, “Spitting in her fanny”, at which point the neighbouring bed occupier had enough and threw them both out. Bravo.

Having digested all that, I’m sure you’re busy clicking through Sky Scanner web pages with your calculator, and so you should be, it’ll be the best decision you’ll ever make. You won’t remember that car or designer handbag you bought on your deathbed in years to come, instead it’ll be some naked Slovakian boy on the opposite bunk, who in his sleep-induced state decided he was going to sit on the end of his bed and glare into your soul, while you pretend to be engrossed in the latest free download on your Kindle. Good times.

Written by Alex O’Brien, my real life older brother. No we are not twins, yes I am the better looking one.

If you want to keep updated on his escapades, home or away, follow him on twitter here. He’s kind of funny.